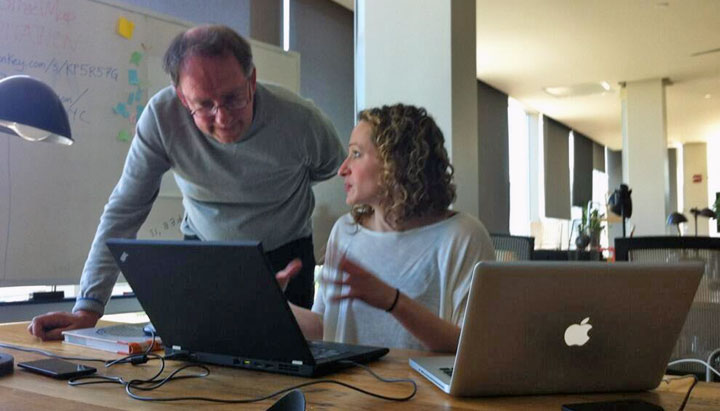 Alyssa Wright and another volunteer at a New York City editathon to map Kathmandu Valley, Nepal, April 21, 2013. Photo by The OpenStreetMap (OSM) Community of Nepal.

The people of the Kathmandu Valley in remote Nepal live in an earthquake-prone region. Gathering data on important infrastructure such as schools, hospitals and other civic buildings could make a world of difference for the community before a disaster strikes. In April 2013, the World Bank led an OpenStreetMap map-a-thon that included 17 cities in the U.S. In New York City, N.Y., a small group of volunteers included mapping volunteer Alyssa Wright. Here is her first person account of what it was like to help map Kathmandu:

Over the course of four hours, we traced building footprints from satellite imagery provided by the US State Department. These high-fidelity footprints are just one of many datasets needed for better disaster preparation, planning and mitigation in Nepal — a country that sits atop tectonic plates at high risk of earthquake.

As most in NYC were new to such mapping, the Nepal team generously provided training, context, and priorities before the event. This dialogue not only helped the NYC mappers use the tools most effectively but allowed our efforts to fit into OSM Nepal’s larger mission of creating an open map of Nepal, for Nepal. We made a small dent — tracing some 500 buildings of the estimated 500,000 still to be completed. The work is not done, nor are we.

The Sunday [April 21, 2013] effort was the second event designed to advance open mapping in Nepal and we’re planning for more. In New York there is growing interest to build OSM data beyond immediate boundaries, especially in areas where such information could help in emergency planning and disaster recovery. While New York City and Kathmandu might seem geographically far apart we find alignment in a mission — create open maps that help us better understand our world and allow us to build more resilient communities, together.